If you have welding goggles or some other kind of protective eyewear, you're going to want to put them on right about now, because jumping Jesus on a pogo stick, you are about to witness some truly bad hair. Seriously: 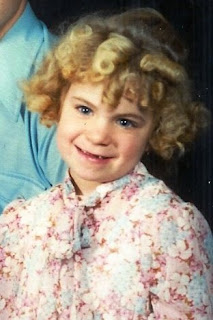 We could talk about the hideousness of this outfit, but I'd rather not just yet, because at the moment I am traumatized by OH MY GOD THAT FRICKIN' HAIRDO. I spent SO MANY of my formative years with my head in sponge rollers, and this is actually photographic evidence of one of the BETTER outcomes. This was considered good! Usually, my hair was flat and limp and stuck to my head within five minutes of the curlers being removed. Clearly, there was a lot of Aqua Net involved for this family portait. Or some kind of evil early Photoshop.

So, in honor of my mother's and my grandmother's dogged insistence on giving me curls (honestly, you don't even want to KNOW how many Ogilvy home perms that I had to sit through, and I actually think I've blocked at least 75% of them out, but suffice it to say that whenever I walk past a hair salon in the mall and I smell perm solution, I have 'Nam-style PTSD flashbacks), this week's trivia quiz is all about: Famous Hairdos Through The Ages. Buckle up! Can you name ...
Standard trivia rules apply: no Google, no cheating, no calling your stylist for hints, etc. I'll post my answers on Monday night after 5pm. Good luck!
love xoxo, rockle at 07:15

file under Fashion, Hair, Random, The Way We Were, Trivia, Ugly and Awful, WTF?