Children of the Candy Corn This is what you wear to the pumpkin patch when you're my kid: a Halloween-themed T-shirt that is maybe but not quite too small, but still big enough to wear in public, generally speaking; pieces of not one, but TWO years' worth of Halloween costumes over capri pants, because hey, why the hell not; an assortment of LiveStrong-style bracelets from only God knows what organizations (I think one of them might say "Got Milk?"); and one leg warmer as an arm cover.

Oh, and let me take this opportunity to point out that it was in the mid-70's that day. So, you know. The short version of the story is that those tiny little pumpkins were a huge hit. Also the gourds. I am a fan of gourds, and I have to say that the kids all had an excellent eye for nice, nubby, grotty-looking gourds that look positively fantastic in a nice arrangement that my husband made at home in a pretty red bowl. LOOK AT THAT: married almost fifteen years, and I am still learning about his special skills. Perhaps unexpectedly, my favorite part of this pumpkin patch trip was traipsing "through the corn maze" -- a/k/a looking for Indian corn. The kids found some pretty Indian corn, too, and we let them run around in the cornfields for so long that I'm pretty sure we had them convinced that they were actually in the corn maze that was advertised in great big letters all over the place. (I don't "do" corn mazes, because with my luck I'll get stuck out there forever and they'll need to call out the National Guard to find me and it will be too late because Voldermort will have already ported me away to Little Hangleton and I think it's possible at this point that I might be getting my pop-culture references confused again.) SPOILER ALERT: There were pony rides. There are ALWAYS pony rides at these things. Shae did end up finding us a lovely pumpkin that she and G carved up the very next day, and which ended up in the trash already because hey did you know that fresh pumpkins can get all gross and moldy and "smell like the cat's butt"? Trust me on that one, too: we learned that the hard way.


Special thanks to Anthony's mom for letting me us his picture. Thanks, Anthony's mom!
love xoxo, rockle at 13:23 No comments:

UGH. It's mid-October, rushing headlong into LATE October already, and I haven't put up any pictures in 5,000 years because of reasons (mostly involving ways in which I suck). So today let's celebrate "Flashback Friday," where in this case we'll be flashing way the hell back to ... late August. OF COURSE there was a slip-and-slide involved. Why wouldn't there be? It's not like we were at my uncle's house, in his backyard, where there is an in-ground pool with hot tub, or anything. Isn't it kind of amazing how slip-and-slides are, like, the great social equalizer? I mean, sure, they're plastic-coated death traps, but have you ever met anyone who didn't have a great time at an event that featured a slip-and-slide? I, personally, have not. I wish I had [1] a bigger yard and [2] actual water pressure so that I could put a slip-and-slide in my own backyard during the summer. I mean, we love watching "Adventure Time" while sitting in front of the giant-ass window air conditioner and eating popsicles, but sometimes you need to go out and make your own adventures, you know? GUH, just looking at this pictures reminds me of how much I miss the summer already, and we have another nine months until it comes back around. This summer was weird, hot in the beginning and cool at the end and many kinds of sinus headaches in between, but the worst day of summer is still better than the best day of any other season except possibly my kid's birthday. Okay, and maybe Christmas. I like Christmas. And Thanksgiving. I love Thanksgiving, too. Which reminds me: I just learned about bacon vodka and I am thinking about making bloody Marys to have with my Thanksgiving dinner that I'd make with our traditional V8 and bacon vodka, if I can find any. Doesn't hat sound delightful? SHUT UP YES IT DOES. A bloody Mary made with V8 and bacon vodka sounds like Thanksgiving dinner in a goddamned glass. Veggies, bacon, and alcohol, all in a Dixie cup? That there equals ZERO clean-up, and if I have TWO I'd be asleep on my uncle's couch before everybody else even got home from the football game. I also like Halloween, because I love Reese's peanut butter pumpkins. Although I will admit that, except for possibly pumpkin pie, which I adore (just the the crust -- only the pumpkin custard and whipped cream parts), I am kind of over pumpkin everything right now. But pumpkin-shaped chocolates? Yes please. So here we are, face to face, a couple of Silver Spoons ... no, wait, that isn't right. Here we are, all caught up. Ish. I have more pictures to put up but I need to ease myself into it. For now, just enjoy this little flashback to the Last Major Federal Holiday. Hopefully this will be enough to get you through until next time. 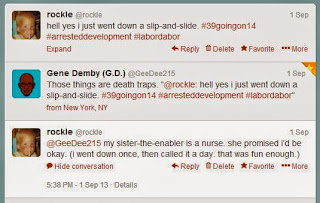 (Oh hey I just realized there are no pictures of me as usual but I wanted to prove that I was participating in the festivities. So, [1] you can either pretend those pictures of my sister are actually me, or [2] you can enjoy this screen print of a Twitter conversation I had with an actual NPR personality. Your choice.)
love xoxo, rockle at 14:16 No comments: